the root of humility: humus (earth)

saturn speaks to the material, the undeniable, the limit. in dualistic terms, we have a soul (jupiter) but a limited body that holds it (saturn). i don't really like that framing, and instead prefer the integration of jupiter and saturn - animism. life and hope and emotion that exists within matter. soul and matter are one.

admittedly i don't know a lot about animism, but it feels very intuitively true to me, in the ways i've perceived life in buildings, rocks, the ocean. i also know that when i focus on it, i can access a way of approaching the world that feels very tender. i can never be alone, if i sense the life that exists in the earthly elements around me. similarly, i can build a relationship with a tree, though we all know theoretically trees are alive - western ideology just trains us not to think of them as so.

it also helps me remember that i am made of matter and material, from the base chemicals, molecules and cells, to organs and functions that are replicated in many different ways in different living things. we are all very dependent on essentially the same things: food, water, shelter, air, sunlight, companions.

saturn was the roman god of agriculture, which lends itself to all kinds of associations: partitioning land is boundaries, reaping what you sow is natural consequence (some say karma), tilling of the land is attempted mastery and control. i say attempted because agriculture fails all the time. saturn lessons teach us that while we attempt to be "masters of our fates", to enshrine security and success, and to have an abundant harvest every year, these efforts often fail for reasons outside of our control.

this attachment to "mastery" also extends to trying to preempt the emotional pain that saturn can bring about (i touched on this briefly in my last post about saturn). there is no shortcut. as a pinterest infographic told me, "the problem with shortcuts is that you arrive prematurely and unprepared". saturn is interested in the growth that sinks into your bones. i also think of this eve sedgwick quote often:

In a 1999 interview, Sedgwick put it this way: “It’s hard to recognize that your whole being, your soul doesn’t move at the speed of your cognition. That it could take you a year to really know something that you intellectually believe in a second.” Sedgwick explains that she eventually learned “how not to feel ashamed of the amount of time things take, or the recalcitrance of emotional or personal change.” Indeed, as she puts it in “Reality and Realization”: “Perhaps the most change can happen when that contempt changes to respect, a respect for the very ordinariness of the opacities between knowing and realizing.”

respect for ordinariness - that is humility to me. knowing that things take time. and we never arrive at completion. there is always opacity, difficulty. growth is not linear either, and i think this quote implicitly speaks to the idea of growth as a spiralling oscillation, where we digest and absorb different kinds of wisdoms in different contexts. likewise, it is very human to struggle with the same thing, over and over.

the word "human" has been used in many violent, hierarchical ways. there have been many who have been denied a particular form of humanity, especially defined by the figure of Man. the root of the word human as connected to earth, just as our bodies come from the earth, slightly shifts it for me. the association with "inhume" and "exhume" also speak to eventual death - another undeniable reality saturn reminds us of. we come from the earth and we return. we are not gods - we are on the ground.

this co-exists with the mystical, the godlike, the spiritual (jupiter). we are made of earth, but the earth is made of stardust. we are both mundane and miraculous. and i wonder if being in touch with the mundane, is what helps us see the miracle of living. a connection between humility and awe.

saturn's rulerships over capricorn and aquarius tell a kind of story, moving from our earthly to nonearthly origins. when i think of aquarius, i think of carl sagan's comments on the "pale blue dot", a photograph taken of our planet on valentine's day, 1990, aquarius season. 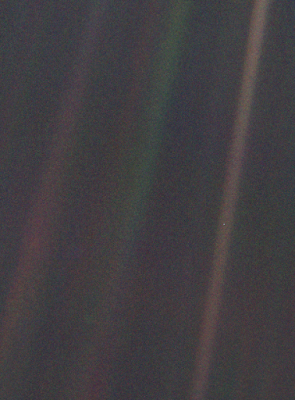 earth lies in the distance, a speck in the yellowish beam on the right.

Look again at that dot. That's here. That's home. That's us. On it, everyone you love, everyone you know, everyone you ever heard of, every human being who ever was, lived out their lives. The aggregate of our joy and suffering, thousands of confident religions, ideologies, and economic doctrines, every hunter and forager, every hero and coward, every creator and destroyer of civilization, every king and peasant, every young couple in love, every mother and father, hopeful child, inventor and explorer, every teacher of morals, every corrupt politician, every "superstar," every "supreme leader," every saint and sinner in the history of our species lived there--on a mote of dust suspended in a sunbeam.

The Earth is a very small stage in a vast cosmic arena. Think of the rivers of blood spilled by all those generals and emperors so that, in glory and triumph, they could become the momentary masters of a fraction of a dot. Think of the endless cruelties visited by the inhabitants of one corner of this pixel on the scarcely distinguishable inhabitants of some other corner, how frequent their misunderstandings, how eager they are to kill one another, how fervent their hatreds.

Our posturings, our imagined self-importance, the delusion that we have some privileged position in the Universe, are challenged by this point of pale light. Our planet is a lonely speck in the great enveloping cosmic dark. In our obscurity, in all this vastness, there is no hint that help will come from elsewhere to save us from ourselves.

The Earth is the only world known so far to harbor life. There is nowhere else, at least in the near future, to which our species could migrate. Visit, yes. Settle, not yet. Like it or not, for the moment the Earth is where we make our stand.

It has been said that astronomy is a humbling and character-building experience. There is perhaps no better demonstration of the folly of human conceits than this distant image of our tiny world. To me, it underscores our responsibility to deal more kindly with one another, and to preserve and cherish the pale blue dot, the only home we've ever known. (carl sagan, who had an aquarius midheaven)

i associate aquarius with the sky, more than other air signs. it's that feeling of looking up and realising just how much space is up there, in the atmosphere, and beyond. capricorn is the mountain, and aquarius is the sky and outer space - places that shift our perspective. places that may seem barren and empty, cold, unable to sustain life, but whose vantage points have their own vital gift.

recently i have been reading "no mud, no lotus" by thich nhat hanh. it has been very affirming to me (i think affirming also in the sense of making more solid). one thing i really loved was that he suggested, when other people share their opinions of you, to respond "that's partly right". no matter whether the opinion is "good" or "bad", because it doesn't encompass the whole truth, which is that we are all comprised of different traits, some of which suit some contexts and don't suit others. we come off in very different ways, all of the time. we all contain situational flaws and situational strengths. ("the ugly road to adulthood is one on which you will repeatedly discover you are capable of both more cruelty and more kindness than you previously imagined")

i am not sure if i will say "that's partly right" openly. but it seems to be a calming thing to internalise, and to speak to yourself. it helps me with the evergreen quest to "submit to the mortifying ordeal of being known". having a balanced view of oneself, being receptive in part. but also, not reacting strongly if another person has a more black-and-white view. i think, if someone is expressing something one-dimensionally, it is very easy to swing to the other side and push for the other dimension. it takes strength to hold onto complexity. though as the mortifying ordeal essay says, "we don’t give other people credit for the same interior complexity we take for granted in ourselves, the same capacity for holding contradictory feelings in balance, for complexly alloyed affections, for bottomless generosity of heart and petty, capricious malice". perhaps an important aspect of humility is being willing to give space for other people to be multifaceted. both taking people at their word, and not. leaving room for not knowing. ("i don't know what they meant by that..... do they know what they meant by that? do we ever truly know anything? does truth ever stay still?") keeping the mind malleable.

which brings me to my last thought on saturn and humility, thinking about libra as the exaltation of saturn. although saturn's homes are a bit inhospitable, his favourite place to visit is the domain of venus, goddess of love, pleasure and connection. in libra, the archetype of balance is strongest. it is also the place the sun falls, where ego struggles. it is here that i see the root of humility also being connected to the old french "umelite", meaning sweetness. libra energy is oriented to the other, the immediate connections we base our life on. the humility that arises from a strong sense of our humanness, our fallibility, can bring us peace and sweetness, the kind that quietly nourishes our relationships. it is the kind of humility that teaches us to speak to others with respect, to try to create pockets of social ease. to be a warm breeze in someone else's life. turning humility into grace.